In the beginning was the Word and the Word told Daddy  Vadim to come to a show by New Zealand’s reggae soul legends Fat Freddys Drop in London. Biblical verses aside, this was the start of a journey of discovery. The mix of reggae, hiphop and soul. Fat Freddy's Drop were not strictly speaking the typical reggae band. No one had dreads, no smoke weed songs and they used an MPC drum machine like hip hop producers use, plus there was a lot of emphasise on the groove. Hypnotic even.  It was like a a Biblical burning bush moment of clarity. This moment perhaps led to the birth of the Soundcatcher and transformation from producing mostly indie hip hop to a new organic fusion welding live instruments with a sample beat making mentality.

Many world tours together followed with Daddy Vad opening and closing concerts, after party’s and the after after hotel lobby party from Berlin to Perth, Manchester to Christchurch. And then came the beats!

First came the remix of Cays Cray in 2005 followed by The  Big BW.  Around 2009 Vadim started his own soulful hip hop group called The Electric with Kanye West’s former rap partner from Chicago Pugs Atomz and Sabira Jade from London. That year they went on to open for Freddy's all over Europe which involved an impromptu busking outside the main entrance’s of their concerts on a handmade moveable sound system then jumping on stage and rocking before them.

Fast forward 2019. whilst digging in the dusty crates, Vad re-discover some of these works that have never been available digitally. Welcome to operation re dust down - remix the remix, update the update. All new vocals featuring some of the freshest  newest upcoming MC's . Welcome to Flashback - an urban review of some of the biggest Fat Freddy's Drop tracks re-done in an Electric way. 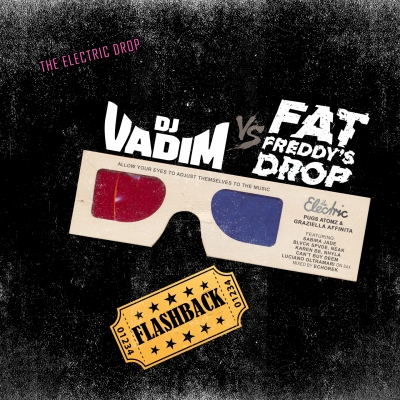